Emotional scenes need more comic props. Next time you have a meltdown, bring a rubber chicken. Don the giant bowtie while sobbing that it's over. Blend those tears with the spewed disdain from a spitting flower.

Furthermore, drunk people should be encouraged to do magic.

My neighborhood independent craft brewery is a quick five blocks up the street. Go straight through the community park until you see the Gamer's Lounge, and then take a left and go up to the Vegan Restaurant. It's right across the way; it's the building with the bar stools at the garage door and the giant eye painted on the door.
They have a Groupon.
I like to walk up and get a flight and a pint. They have locally-made wines; four different 4oz glasses for $7; and they make a blonde ale that gives me Crooked Eye. 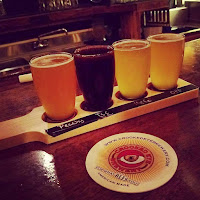 They know my name.

I don't meet a lot of people that like me.
It's a strange glitch in the time continuum when people want to know my name.

His girlfriend really loves him.

He wanted to have that conversation, the one to 'clear all of this up and move forward.' I find that kind of talking typically produces way more muddling and a step backwards, but who am I to question where people use their words. I imposed a condition of pure forthright and honesty. I needed no such condition to be accepted; as I had already had the facts presented to me in every manner in which one could possibly need, and a few that you really just fucking don't.
Still, you need conditions.
He said a lot of things. He didn't talk about his girlfriend. The one who loves him. I didn't need him to talk about her any more than I needed conditions on the conversation; I just wanted to see if forthright and honesty were in his wheelhouse.
I wonder if her two little dogs have names. I will call them Forthright and Honesty. They love him too.
It was his birthday, you see. And her card was so heartfelt. A perfectly-suited set of animals were cuddling on the cover. The inside was blank of artificially generated sentiment; only the purest hand-written emotion scrawled across the page. Each "by your side" was a little bolder than the last, as if she pressed harder to make him understand how she cared. Line after line of dedication punctuated with celebration of his time with her.
The heart at the end next to her name was outlined in both black and red.
She stopped what she was doing while signing a card to open a new fucking pen to retrace the heart.

He didn't talk about the girlfriend that loves him.

I left the conversation rather abruptly.
I don't believe in dramatic endings. If I could get away with it, I'd disappear in a cloud of smoke, leaving only an oddly one-eared balloon animal in my place.

I believe I can be magical.

I drove home and parked my darling beat-up truck out back, and I cut right through the yard to hit the street in front of the park. CUT THROUGH THE YARD. Who does that? Like there's not an ideally laid out path that leads to the exact same destination only a mere dozen yards away along the edge of the house. Maybe take the sidewalk built for the explicit purpose of getting from one side of the grass to the other?
Nope, not this girl.
Not this day.
CUT THROUGH THE YARD.
The remaining four block walk was a flurry of kicking those smelly green things that fall from trees that I bet piss off dogs who think they are tennis balls. There was some singing, but mostly subdued. I was wearing a black bucket cap.
My first beer in, I ran into a person I knew. We said some words, enjoyed a laugh. A band started playing over by the brew pots, but I needed less noise so I took my beer to the other side of the garage door. The bar stools line up pretty nice with some empty wooden barrels that the brewery keeps out back, so I flopped my ass down and watched the muscle heads cruise around town in their customary three-block lap.
The seat next to mine was empty for only minutes before another person I know hooked foot into the rung to get an elbow on the barrel. There was even more of the chatting, some of the chittering, and a little of the chuckling. With a completely different human being than the previous quota-filling communication session that I partook in only moments earlier.
Now I needed more noise.
I went back inside and grabbed a stool at the bar. The bartender brought me another blonde ale and silently nodded. My favorite kind of exchange.
I leaned my head back and listened to the band. They were skilled, despite being three middle-aged dudes in a garage brewery. It's what I picture Chris would be doing if his wife and kid weren't already worth ten million rock stars.

They were playing Pearl Jam's "Rearviewmirror."

I don't look back on a lot of things.
I remember memories, as I'm sure most people do. I recall times that make stories; I paint moments with words.
I was fucking there, man.
I don't need to go back.

I got completely lost in that time and space; slouched back to hear the end of the song, wondering where to go from here, staring at one-third of a beer that I had been nursing. The bartender stopped and tapped the glass and I instinctively picked it up to swallow the rest. I nodded in unison with my arm lowering the pint to the bar and my eyes made contact with both of the bartenders who had come to stand before me. They shared a glance between them before the older of the two nodded and the other pulled from below the bar a series of wrought-iron rings and hoops interconnected and slapped them on the bar before me. 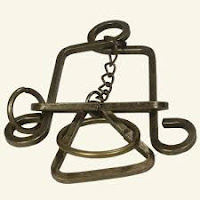 "It's a puzzle," he said, and swiftly slid the hoops from here to there until they were all separated. He looked at his bartender backup and the opposite reached in and deftly put the rings back to their woven together state.

I picked up the rings and weighed them in my hands as the bartenders scattered. My ale had marvelously refilled itself and I reached for the glass as my brain picked apart the possibilities of this twisted metal. I sang through another Pearl Jam song ("Rats" this time), belted out some Fleetwood Mac, got a little misty-eyed with Petty, and not even once hollered about Freebird! like an asshole. (until later). Each time my beer neared the bottom, a questioning face would appear.

"Another one, Joleen?"
Not yet, man. Can you show me how to do this again?

The band gave an encore. ("Elderly Woman Behind The Counter In A Small Town.") I settled my tab and called The Sim to let her know I was walking home. She said she'd pick me up, but I insisted on walking. I knew that to mean she was going to meet me along the route to the house, but I didn't mind. I like the night time.

She said I danced the whole way home.

I could be magical.
I apparently had enough to drink to believe so.

Once I arrived to the front yard, The Sim hung outside with me for a little bit. I danced some more, and made Sim sing with me. I complained about people who cut through the yard. I didn't have my hoops with me, and Drunk Me didn't think to walk inside to get them.
But I was wearing a black bucket hat.
Over and over I'd flip the hat into the air in an attempt to catch it on my head. I'd fail miserably at each shot, instead hitting myself in the face or the arm, or just dropping the hat altogether in a fit of laughter.

Finally, I just placed it upon my head, pulled the hat down over my ears, and declared myself to be "incredible!" 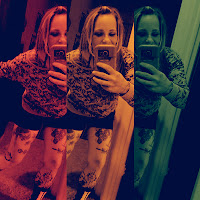 There's a Dumbledore quote that I'd like to use here. I think it's the one about needing socks.

Email ThisBlogThis!Share to TwitterShare to FacebookShare to Pinterest
Labels: drunk, Dumb Bitch, I s'pose, Joleen Doreen's Guide to the Jump-Off, magical me, No Shoes, seriously with the photo filter you hipster?, What?, yellow, You're weird Joleen Doreen
Newer Posts Older Posts Home
Subscribe to: Posts (Atom)