People grow.
I mean, not me, obviously. I'm still making the same bullshit bad decisions. But I hear other people grow. Like, emotionally and spiritually and whatthefuckever. I wonder how that feels.
The kid says I have to learn to accept that feeling is part of living. I'm not sure if I find that to be accurate. It's also not accurate for me to call her "the kid" anymore; she's well beyond the point of being her own human. I guess now I'll call her "the Sim." It's her name anyway, I guess it sounds right.

Still, that nonsense about feeling?
No. Thank. You.

Wait, is that what I have to do to grow?
I have to feel?
You mean learning to love hoop isn't enough? 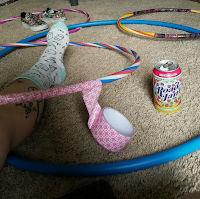 This one here was a fine moment:
A good time ago, as you may or may not have read, I ended up on the side of a relationship that I had zero experience with; the outside. I did what I could to move away from the radius; tried with all I had to not end up in the circumference at all.
To no avail, of course.
Geometry ain't nothing to fuck with.
It continued upon, in this weird roundabout way for quite some time. He'd feed me a tale and I'd chase after it. I'd stop running and he'd come around.
Just like circles go.  And then there was this night. This one night. The details are unimportant. You need not know of how the episode began;

(fade in on a dusky kitchen.)

The counter-top griddle sizzling with pads of butter that the bearded bear laid upon it. A twinkle in his eye as he flashed a toothy smile.


"Grilled Cheese Fight Club."
Yes, you heard me.
"Grilled Cheese Fight Club."
And so it began. A fury of loaves in the air, the crisp notes of fresh-baked yeast hitting the air with the first swoooosh of the bread knife. Cheeses. EVERYWHERE. Smoked gouda, mozzarella balls, goat, farmer's, cheddar, vampire cheddar, whiskey cheddar, somebody has a thing for cheddar, provolone; there could have been nothing rotten in the state of Denmark that day, for all of the cheeses were in the Pike Pub kitchen.
Add mushrooms here.
There's a line between a grilled cheese and a melt, scientifically speaking. I believe that line to be meat. HOWEVER, bacon is always the exception. So, for clarification purposes, the rules of Grilled Cheese Fight Club are as follows:
And the first contender off the sizzle is a dessert grilled cheese, and the crowd goes fucking apeshit. A DESSERT GRILLED CHEESE. Liberally lathered salted butter on a thick rough cut bread, half of an inch slather of farmer's cheese, all drizzled with a fine maple syrup and grilled to a toasty golden perfection.
It tasted like a godamn fluffernutter. A GRILLED CHEESE that tasted like MARSHMALLOW.
This fight club was over before it even started.
Or so they thought.
And out comes the hearth-baked fire bread. A slight dallop of a good fig jam, with the smoked gruyere, a red pear, and black forest bacon. Top that with a little more whiskey cheddar and a smattering more of the fig jam for good measure.
Well.
THAT's a grilled cheese.
After that came a tiny grilled mixed cheese on quarter bread, and then a bacon cheddar on cheddar wheat. At one point I thought I saw an asiago pesto, and there was rumor of a dill havarti and tomato, but these could be cheese-imaginings for all I know.


I don't know if a winner was ever determined, we never talked about it.


Four hours later, I'm sitting on the back porch next to a girl in a tutu with a ukulele. Tab here. We had just finished watching the fire dancers in the side yard play their staffs and hoops and fans with the ease and grace of people NOT spinning and throwing and holding things that were on fire.
Such beautiful people.
And she begins to play her ukulele, this enchanting blue-haired nymph. So I start to sing. Out loud. Near people. On purpose.*
*full disclosure: NOT on purpose.

A lot had happened in that four hours. I hugged a bear for a long time. I danced through hoops I didn't know I could. I think I fell? At least once?  I had conversations and hugged people who were on every plane near mine. Every plane I thought was mine. Every plane I wanted to be on.
I had a heart-to-heart with a sloth. 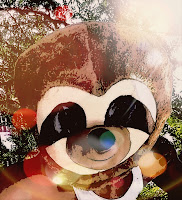 I think I've grown.
I never would have talked to a sloth before.

I think I can grow.
I'd like to think I have grown.
I would say that I might grow.

It's much harder to human than most humans get credit for.

It has never been easy for me, even when I tried. There's a complexity to most emotion that I find to be simply unnecessary. Blame some diagnosis, blame a video game. Blame my mother, blame Depeche Mode. Blame psychological damage, blame The Baby-Sitters Club. Blame Data from Star Trek: Next Gen. I think the best thing about where I've been is that there have been times I don't have to try. Just existing is enough. When you feel like you don't matter, it makes it far easier to not care.

I wrapped myself in where I should go and what I should be, to get only to where I was, before I found me.

This one came a bit around the way. The connections that I made surprised even me. There's a harmony and light to some people and things that I had been missing since all of the death and disease and darkness decided to plague my existence.
Go figure. 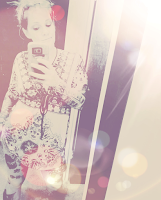 I never would have thought it would be That Guy that tore me out from under being afraid to live.

I'm animated as fuck.
I'm damn full of life.
And I should be.
FERFUCK'SAKE.
I've gone through a damn full life to get here.

I hate to be that asshole that talks about mountains, and then gets one tattooed, and then climbs one.

So we went to Colorado, and then climbed a few mountains. 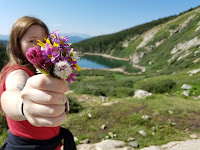 It played out exactly as your local grocer's granola aisle would like you to believe. I know where I want to get to in life, and every spare second of it belongs somewhere else right now.
On the trip back, I lost a dear soul and things could have gotten pretty bleak. And then the "it's not you, it's me" conversation ACTUALLY took place; which, incidentally, I previously thought to be nothing more than writer's foder. I have now determined to be both real, and, real fucking stupid.
So things could have gotten to whatever level in the emo-rainbow is beyond "bleak."
Maybe "decayed?"
That's a lovely shade of Decayed blue?

If ever the definition of surreal, it's how one feels after hearing "it's not you" and then hugging a bear. Followed by fire fans and ukulele. Then dancing through some things in the yard with a lightsaber. Double shots of whiskey. CAP. Scrum in the ring with an 82nd Airbourne. More grilled cheese.

My eyes opened the next morning upon what I knew to be the last page.

I'm on my way to learning who this me is, I think she feels okay. She's smart, that's for damn sure. She got the tattoo ahead of time on this one. 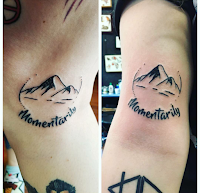 One might say
PREEMPTIVELY.
Written but not read by Joleen Doreen clocking in at 9/06/2017