The mirror in my hallway has been waiting to be hung since the day I moved in. 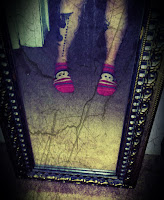 It's not that I'm not capable; the art adorning every damn wall throughout my third-floor walk-up quite points to the opposite. Except the framed middle finger. That points up.
Obviously.
It's also the answer I give when someone asks if I "need help with that?"
No, I don't need help. I put this desk together my own damn self.
I've mounted shelves and installed wall brackets to hold bicycles.
Yeah, I've fabricated units and assembled some shit.
Hell, I sanded and stained the entire length of my balcony deck when I moved in, just so I could be certain of the last time it was done.
I daresay, my toolbox is pretty nice.
I have a hammer drill.

None of this impresses me when all I can see is my feet.

The mirror is a two-man job, you see.

No, you probably can't see either.

Don't get me wrong, you can get a titty-pic in the frame if you stand way up the hallway and lean at just the right angle. But it's just such an awkward pose that it takes a good ten minutes to un-kink my back and I don't see the gains outweighing the cost.
I'm just not sending enough titty pics to warrant a yoga class.

I had decided, after the third or fourth time of asking for help, that I wasn't going to press the issue any further. The godamn mirror could sit on the fucking floor. I've never had the nerve to handle an entire view of myself at once anyway.
I'm sure I could piece together a whole image in my mind if I was tortured and it was my only option for survival.
Like a color-by-number but with random naked texts.

Self-confidence is a son of a bitch.

Especially when you have none.

I look at my feet a lot.
Which is perfect,
because I have a mirror that sits on the fucking floor.


I didn't ask to be a feminist.

You don't have to fucking ask to be a feminist.
You dumb cunt.
Still.
Didn't ask.

Gender roles are eerie.
Dictating assignments based on the placement of hormone generators seems about as logical as the assumption that I'm not capable of holding a higher position; "like a woman could do my job."
I'm sorry my internal nutsack doesn't make me qualified to walk with such a load of shit in my pants.
I have no time for more responsibility as it is; it's not like I don't have a dinner to make anyway, amIright,

I'm far more offended by the suggestion that I better be a good cook.
Bitch, I am a good cook.

Do you not see the size of these thighs? 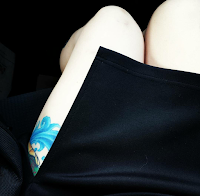 
You should be impressed with all of the other shit I can do.

Or not.
I don't really give a fuck if you're impressed.

And that's when feminism landed on me.

I turned out to be a lot of things in life that I never intended to be.
Fighting the system from within.

TO THE HIPSTER LEFT.

I bet"it's complicated" is an option on the application for the new fucking Rotary Club.

Are the Suburb² Police going to want to catalogue my tattoos on Instagram?

Do I have to pay higher taxes if I turn down the chance to live in an abandoned factory?

These questions haunt me.
Along with "What in the fuck makes you think that I can't do your job even better than you just because I'm a woman?",
and,
"are pork rinds a meat?"

There's a great story that gets passed around my family every few years, mixed in with the fantastical fish tales of dead brothers far and wide, and I've heard it enough to believe that it happened.


The sun glitters upon the edge of a blue rimmed water in a quiet valley; the sound of the local station blaring from the pool-side radio warbled by miles of distance and static. A sleepy family spots the scenery, here and there dozing on the woven plastic chaise-loungers of the 80's whose click-to-set sound you either remember or you don't. In the corner of the small fenced yard, a grill puffed out a succession of intervals known as "Summer Minutes," the bursts of charcoal-fused water vapor ticking the afternoon lazily away.

Next to the indigo depths of the in-ground pool of water, a few small children bantered wittingly about. Well, I was witty. Jimmy was bantering. Jake was small. We were all children. We were all about.

There are few details that I recall with accuracy and certainty.

If there were ten people at the poolside on this particular afternoon, it's safe to assume there are twenty different versions of what happened next.

I know that one moment I was next to the water...


... the next, a light glow rose above my head as i looked up. The movement of everything so slow-motion; my eyes coated in a yellow I could not blink away. Moments felt like i was sinking and so fucking heavy, nothing different there.

Quiet I will never forget.

The space above me began to bubble and my reach was plucked upward, my arms raised to cover my face from the boiling point just above my head. My nose began to burn and my chest felt so empty; I remember little else.

I've been drowning ever since. 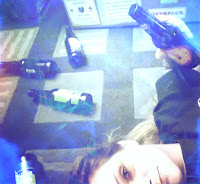 For years, as the story was told, everyone knew that Jimmy reached down into the water as I sank and pulled my tiny self to the surface. It was Jimmy that saved me, of this we were certain.


I think Jimmy pushed me in.

Never was my older brother a fan of being shown up by a girl. I asked for help, I'm sure I did, as I began to sink into the water. I asked for help at least three times before I looked down at my feet.

If i wasn't so stubborn, that mirror would stay on the fucking floor.

It wouldn't matter if I was a man.

It should come as no surprise that I fucking hate the color yellow.


And asking for help.

But even more than that,
I hate looking in the mirror.