Play circus music at my funeral.

Fuck, bring an actual circus to my funeral. The music will follow. I want clowns and jokers, the kind of dickheads with water-squirting flowers and ill-proportioned balloon animals. I'd like monkeys in tutus and a bear on a bike, but only if the bear is treated right and wants to be there. Get at least three troupes of mimes. The popcorn girls should all be dressed like the receptionist from Beetlejuice. Stretch a tightrope around the room and get a bunch of those acrobatic poodles to do their thing. If you need a lion-tamer, Mom knows a guy.
No fucking elephants.

Because by now I've decided that this is supposed to feel like a poorly run sort-of action-packed somewhat unethical travelling spectacle. That's a little long-winded to stretch across the marquee, so it just says LIFE. Most of the neon is burned out, so it kind of just flashes LiFe; and the F is prone to not working at all and then it just says LIE.
Still a circus, none-the-less.

I was a young parent, out of the teens by barely a whisper when motherhood slapped me in the tit. A lot of my methods and means were based on the parenting I had seen; so I was crazy, but I was also very strict about it. The toddler years for my single offspring were quite rigid and structure, I didn't have a lot of patience for children at the time. Once schooling began, I managed to mellow out somewhat. I guess not issuing homework in kindergarten IS the teacher's decision, no matter how strongly I disagreed. I'm sure there was a sigh of relief around the tiny faculty lounge when my life fell apart. Grandma was way easier to deal with at those parent-teacher conferences.
I was a bad mom for a year(ish). I know I was a bad mom, because I distinctly remember my six-year-old saying "you're being a bad mom." That little shit was right. I let her grandparents shoulder a pretty large portion of her upbringing in the months surrounding my divorce, the death of my brother, and learning of the uterine cancer. It sure didn't flow as smoothly as that sentence made it seem. There were giant uproars, emotional upheavals, and devastating consequences everywhere. It was a real three-ring show.
I'd probably still be there, stuck under the big top, if I hadn't taken a break to run away from the circus. I mean, it was months of cancer treatment or whatever, but it really cleared the peanuts from my head. And my cooter.

I trained to be a better mom while I was sick.
I read all of the Harry Potter books.
(I changed the mind about the circus at my funeral. Make it a WIZARD circus. We'll work on the details of that another time.)

It took a few years the get a handle on being a ringleader. Parenting seems to involve a lot of trial-by-error, something I liken to trapeze work. Or being shot out of a cannon. There's no way to teach those things without doing them yourself. Raising a child is the same.
Sometimes that is easy: I've learned to cook, a skill I can pass on to my daughter through demonstration.
Sometimes it is hard: I have exactly zero discernible healthy emotional coping mechanisms, I have to learn them from my child.

I've been very open with my daughter when it comes to the past, present, and future. The lessons of anything are discovered better when they are shared. Any asshole can slap some bullshit justification on their actions to find something teachable there. But it takes a different kind of honesty to understand the education that comes from living the consequences. You don't show someone how to breath fire without first making them swallow a few flames. Or in this case, sifting through the ashes of all the bridges I've burned.
It doesn't sit well with other people that I speak to my daughter so candidly and without reservation. We've had more than a few encounters with hecklers in the crowd. I don't believe in hiding behind the guise of "good manners" as a justification for not addressing uncomfortable issues. Shaving your asshole, using alcohol as a substitute for emotion, accidentally fucking the wrong person a dozen times, figuring out the drugs, falling out of love, getting those multiple orgasms, when not to suck the dick, where to shotgun a beer, why you need to know how to pick a lock, how to ALWAYS call for a ride... these are all things that need to be discussed, and so much more.
Jizz-in-the-face happens, whether you tell them or not.

If you're going to be a freak, you can't hide from the spotlight. I use my experiences as props for the show; jump through a dead brother hoop here, throw a cancer there, juvenile delinquency stealing cotton candy over in the back. Every night under the big tent; a parade of fucked-up relationships and irrational obsessions. I stand upon my soapbox making callous fun of my own eccentricities;
"This is why we don't do the bad drugs."
"Your cooter will beat the shit out of you. So much mucus."
"That is what happens when your insecurity drinks tequila. And that. And that."
Barking out their impact 140 characters at a time.

I gave up trying to hide my damage.
Salvaging through the scrap is how I keep this circus on the road. 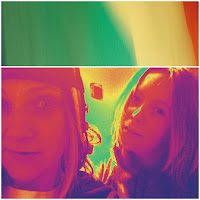