I never intended to have sleeve tattoos.

I was a piece-full person for many years. Here and there a smattering, a few groupings; but never a solid ink fan, by any means.
And then came the tree. It started on the right arm, just a few branches rose from the carved trunk. And then the leaves fell. Suddenly more limbs began snaking across my chest and back; and, well, they simply looked foolish without some clouds behind them.
The sky was the limit.
Meaning, "the sky rose up my front to the collarbone, the absolute limit of what is called a chest piece." And what's the sense of having a sky if it isn't the sky over Hogwarts Castle. Probably the finest sky anywhere, in my opinion. After covering one side of my back with the fictional architecture of a boy wizard, it seemed hardly a stretch at all to include his Giant best friend, the Hogwarts crest, all four wizarding school mascots, a magic wand, a Golden Snitch; Harry's patronus, glasses, and scar; dragon wings, Fawke's burning feather, and Dumbledore's epitaphs.

I ran out of empty space on the left arm at that point.

The tree stood alone on the right arm. "I'm not a sleeve person," I would say, ignoring the hours of seepage it took for my Harry Potter tattoos to heal.
Soon after that, I hit a milestone with my job and Thunder and Lightening were added to the branches. And what's a family tree without a voodoo doll? Plus, trees need rainbows like birds need bees.
I'm saying I put all that stuff on there too.
The elbow needed a patch, or else it wouldn't have matched the other arm. Then the lower forearm just looked silly with it's simple wording, best to turn that into an entire comic book. Next thing you know, I ran out of room on the right arm too.

I was left looking at my hands.

Throat tattoos are serious business. Nobody underestimates how much you don't fucking care once you've crossed the throat tat line. Not the side-neck, behind the ear, hidden along the jawline tattoos; I'm talking full-on portrait of your grandmother Erma as a sugar skull corpse's bride throat tattoo. An owl in a fucking top hat and monocle across your trachea. The outline of the icy fingers of Death gripping your windpipe.

Just staring at my hands.

It's a three-finger hobo glove that I'm going with; full back of hand with details that drip down the pointer, middle, and ring fingers. Harry Potter-wise it's pretty subtle; Sirius's mugshot from Azkaban, and the opposite hand, a Padfoot snarl.
Those words are both English and sensical, I swear.
There's a lot of swelling that happens when you ink your hands. I normally swell anyway, as anyone who has seen my guns is already aware of, but swelling on the hands is more than my arthritis signed up for.
I'm old.

Too old for hand tattoos?

Never too old for Harry Potter.
One day I'll do an entire explanation of why I live in the wizarding world. I just haven't found the right title for that story yet.

Staring at my hands.

This story that I need to explain later keeps getting longer and longer.

So 1998; cooter and shit all unvacant.
I had planned to briefly pause the collection of skin art that I had started a few years earlier (in the juvenile hall story years) so that I could give birth all fresh ink free. There was just one last etching I wanted to make; and as I've always been artist-loyal, I hopped in my adorable '92 Pontiac LeMans and drove the 120 miles away from my hometown to the basement of a guy I knew that could tattoo. I stopped along the way to see the Impregnator, a much better moniker than "baby-daddy," and spend the night before finishing my trip to Inktown.
The weird thing about being young and pregnant: nobody else cares that you can't play beer pong and get shitfaced. So whilst the near-future college grads all red-cupped it up, my stuffed-embryo ass drank flat soda and silently judged the morons. At one point during the night, the other half of my kid's dna made the suggestion that a tattoo the next day was somehow unnecessary, as I "already had enough,"
"ALREADY HAD ENOUGH."

They're MY fucking hands.

I went the next day to get a tattoo; defiantly, of course, but also defiantly. Before I could even sit in the chair to get started, I began having some troubles. Ended up in the hospital so that they could stop the contractions, because 5 months just isn't enough pregnant.
I guess.
I never went back for that particular tattoo, or to that particular artist.
The kid was born a month and a half later. She was in a hurry. I didn't get another tattoo for seven years.

This story goes on.
I'll get to that.
I'm getting to that.

First I'm getting my hands inked.

I guess three-finger hobo gloves are my way of preparing you for my throat tat. 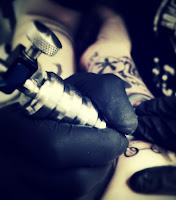 I'm not a sleeve person.
Written but not read by Joleen Doreen clocking in at 1/12/2016