I was a housewife once.
It was a little over a decade ago, and I wasn't very good at it. I was doomed to failure, you see, because I didn't know how to make gravy from scratch and my husband was fucking someone else the whole time.
Gravy turned out to be easier than I thought. It's all about getting the flour dissolved in water before you add it to avoid lumps. And whisking. Whisking is important, although I'm not sure if it's the motion of whisking or simply the idea that you must whisk that seems so crucial. Not much you can do about the cheaters when you get those. I guess you just take them lumps as they come.

All of the standard bitter ex-wife descriptions applied to me for a while after that; jello shots, frosted tips, boy toys, club nights, and the like. It was an ugly time that I don't like to remember, I think I was still drinking Michelob Ultra. *shudder* It would take something pretty fucking drastic to snap me out of that light of a beer.
And that's when Jake died.
Bring on the whiskey!
Cover the bottle in drugs!
Light the drugs on fire and watch the world burn!

Losing a brother was decidedly worse than a cheating husband.

In terms of coping, I didn't.
The nights I spent in the bar were not for pleasure, it was pure business. I was being dispatched to kill braincells, and I fucking annihilated them. There are entire stretches of weeks that I have no explanation for; visible scars that I cannot decipher. So many broken flip phones (the 2000's were a different time, man).
Rather than insecure distractions, I sought nothing but escape.

Look,
we've all read the eye-rolling darkness of Poe. "trapped in a hell of my own kind. imprisoned within my own mind." (i made that up). We've all ripped at the black that threatens to weave its way through the fabric of our lives on occasion.
That's not where I was.
I was on the corner of shotgunning Jägermeister and blowing people for coke. At the crossroad of way beyond fucked up and The Crossroads (gentleman's club). Careening through the intersection of no plan to make it and going to end up dead. I was seizing all the fucking days. People on benders came to me for a tour.
I was entrenched so deeply in a world of hurt that I feared I would not return.

Then one morning I woke up and I didn't feel good.
This was unusual for a number of reasons.
The first being that I woke up in the morning, rather than crawling from some random bed at two in the afternoon with a premixed jack and diet already in hand. Instead of slowly blinking to life while lying in the dirt next to the last embers of a glowing couch fire at dinnertime the day after. In lieu of whatever the fuck happened that time the State Police showed up for Noodle, or the time they showed up because of the mo-ped incident, or the time they... you know what, I digress...
The second reason was that I could feel.

It took a good solid year and a half, all the booze, so many fucking drugs, and a sprinkle of cancer; but goddamit, I could feel.

It took some seven or eight years to get through the killer cooter germs: time in which I was able to cope, process, digest, cope again, toughen up, sober up, grow up, and then finally un-sober up, un-grow up, and breathe.
I never should have waited to feel. Things kick you in the dick a whole lot harder when you use one tragedy to block out another. My dead brother really pissed me off, sure; but maybe it would have helped me get through if I had relied on people rather than looked to blame them. Maybe, just maybe, I shouldn't have been so mad at my ex-husband. He wasn't right, not by any stretch of the word; I've just stopped believing he was wrong.
Before anyone gets bent out of shape by my lackadaisical attitude on infidelity, please hear this, "I don't give a fuck."
The idea of a committed relationship means something different entirely to me than it may to you. As there is no one that I've dedicated my life to more than my kiddo, THAT'S where my loyalty and my need for honesty both reside. Any person that is involved in her life deserves my respect and consideration, far more than that person may deserve my emotionally damaged irritation over where they've put their dick.
If I stopped speaking to everyone that fucked someone I dislike, I'd never talk to anyone. Ever.

I'm not mad anymore.
I mean, I'll always be bitter, but I think that looks cute on me. 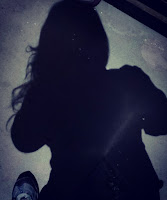 Black is slimming.
Written but not read by Joleen Doreen clocking in at 1/26/2016