Good Luck With That

I made a resolution.

It wasn't for the New Year or anything, I made it in October.
But everyone keeps talking about them and it felt pretty neat to nod in agreement with the context of social conversation for a change. Rather than the bewildered head shake that is my standard involuntary response to when people begin speaking.
I think resolutions are bullshit.
Change is ok with me, I think change is fine. I'm actually learning to like change. It's resolving to change that seems like a stupid fucking idea. The other 364 days of the year, you're perfectly okay with being the kind of douchebag that sits around drinking shitty booze on the last day of the calendar, wondering which ONE thing you can pinpoint to "fix" to make your entire cracked out existence seem worthwhile?
All the while, the answer is painfully obvious.
You need better booze.

I made a resolution in October.
It wasn't to change a part of myself either. Those are the start-of-year resolutions that inevitably end up in the trash by the third week of January. Nope, I'm not going to stop doing, lose this, tighten that, tone shit, bro shit, avoid sugar, cut carbs, stab pudding, be nicer, smile more, participate in unsolicited kindness, solicit kindness, or engage in any of that other personal-gain nonsense. Resolutions like that are doomed to failure for me because I am a selfish, greedy, uncooperative gluttonous bitch.
I change on my own, inevitably, without the aid of a clock counting down.

Respect is a tricky gambit.
You've got to give to get; it takes one to know one; I know you are but what am I.

I made a resolution in October to learn.
From mistakes, from myself, from change, from the other side, from what I want, from what I've done, from insecurity, from victory, from bbc.
From good booze.
In days gone by, action and reaction tended to fly from my person without much beneficial reabsorption. Spouting off on a tangent about the size of Ted Nugent's dick only gets you so far in life. It's when you develop the ability to detect who bristles at your humor to read a room of Republicans that constructive things can begin to happen.
Walking the line of reportable inappropriate behavior has never been easy; many times in the past I've careened into the "permanent record" side of fucking up. It's not that I don't know right from wrong; I just refuse to recognize its authority.

I made a resolution in October to learn to like myself.
I didn't make the resolution as much as it made me.
I had woken for the day at 9pm to another bout of hating myself and all the acid reflux that comes with it. Bile infused with loathing, and just a hint of why God why. Punching the clock of us versus them, coupled with lack of heart and buckets of discouragement, weighed me down like an anchor and sunk me to a level where I thought I would drown. Down deep in the pool of rotting rancor and hurtful hostility; swirling rage and seething hate; festering discord and sweltering uncomfortability; lingering loathing. And farts.
There's no fucking air down there.
SCBA gear was all I could do to breathe. I donned. I doffed. I goosenecked away the toxic.
That's a hazmat joke.

Respect is a catchy jig.
If you can dish it out you can take it; treat others as you want to be treated; give a penny take a penny.

I made a resolution in October to be nothing more or nothing less than Joleen Doreen.
It didn't go well at first. Because, you see, I have no fucking idea what that means. About a week and a half in, I think I smiled. Maybe it was gas. A few days after that, I might have chuckled. It was probably gas too.
"Fuck it," I thought. "Do this right."
And then I giggled out loud, I laughed with whole heart, I howled with abandon.
I didn't understand things any better. There was no great insight as to who the fuck Joleen Doreen is supposed to be; no incredible A-Ha moment that reflected all that I consist of into some kind of inked graphic novel.
That's a tattoo joke.

Respect is one of those things that grows on its own, even if you keep it in the dark. It feeds on resolutions, but only those made on any day of the fucking year except the last. Or first. Resolutions like the ones you declare in the unbreathable moments; resolutions that scrape the barrel of your existence for meaning. Resolutions that pull you up, one day of hating yourself at a time, to where people look you in the eyes. To where you're good at what you do. To where doing it well IS doing it right. Those are the feelings that respect grows on.

I'm going to learn to like myself, I resolved, back in October.
Still working on it. 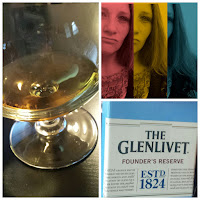 Got better booze though.