What do you think that means?

Do you think it coughs up a wisp of disappointment at my lack of creative effort? Does it smack a bit of an order; a demand of sorts to engage in some storytelling? Issuing mandate or directive, perhaps a plea to get me to put some smattering of nonsense to the page?

I must have thought on it nearly an hour.

I came to understand that my mother thinks that I still write the date. As if I've kept a pencil to paper to tick off the days/months/years gone by in which I've categorically wracked up the same ratio of bad decisions to booze consumption as I had the previous day/month/year before. Like I'm not fully convinced that it's still 2004; coincidentally, the last time I physically wrote the date.

I used to sing a lot.
I tell my seventeen year-old this quite often, almost by way of explanation as to why everything I say is in song form. Or, more accurately, I holler to her from the shower when things get particularly Mellencampy in there. There's not a lot that I won't power ballad, or show tune; and lucky for my kiddo, she's the one subjected to the treat on a pretty regular basis. The life lessons I instill upon my child mostly involve when and where the rhythm will, in fact, get you.
It runs hand-in-hand with the dancing. Dancing is a little harder to sneak into a normal social situation, but I'll sure air-hump the hell out of any problem I possibly can.
I'm on this female-lead rock kick. Classic Joan Jett, Halsey, Poe, Meg Myers.
I never knew what a feminist was. With a headstrong mother such as mine, there was never a need to put an actual word to the behaviors she exhibited.  It was only when I noticed the absence of equality that the burden of defining "Why?" fell to my wholly independent yet systematically oppressed mother.
Why she couldn't find a job.
Why rape goes unreported.
Why the word whore starts with a W.
Why they ask where her husband is.
Why perfume smells so damn bad.
It wasn't the answers that bothered me; everyone knows it's the lack of bee spit that makes manufactured fragrances so rancid. What grated my goat was the coalescence of nonsense and bullshit that generated from the questions to begin with.

It's not the Why?
It's the WHAT THE FUCK. 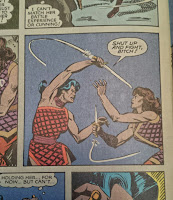 There was this one summer,s let's call it "1991" (for Gulf War purposes,) in which I was, let's call it "hired" (for Gulf War Purposes,) by my mother's third husband to be the, let's call it a "gopher" (this had nothing to do with the Gulf War).
He was The Carpenter, for those keeping track.
I was employed to work on a roofing project, of which I had zero applicable knowledge, but I carried a great desire to have money. And was the only candidate for the job (for Gulf War purposes).
It was a rich-lady roofing job. Things were serious. My duties, as they were, involved both measuring the rejected cedar shingles for replacement pieces, AND hauling away the then-defunct planks to be sold off to the sawmill for chipping when the rich lady wasn't looking.
It was a lucrative gig.

Not for me, obviously; but surely for the men running the show.

For a good bit of time, mom's husband #3 (see The Carpenter, above) ran his construction business in partnership with the guy that would eventually become DosDad, herein referred to as Step 2.
But that's a story for another time.
The important thing here is ME.
Focus.
That story is tentatively titled Shotgun Booze (for Front Toward Enemy purposes.)

I was paid an hourly wage of $3.80/hour, because the 90's were a different time, man. Of that three-fucking-dollars-and-eighty-fucking-cents an hour, nearly HALF of my, let's call it "salary" (I will NEVER blame a war for this), went into the coffers of Step 2.
This was my first experience with the, let's call it "glass ceiling."

Still to this day, the WHY? on that question plagues me.
I assume the answer pertains to both child labor and the ability to exploit women at a cheaper price, but a girl can only dream.

I still sing a lot.
It's just different songs now. More of it pertains to why I think the system is ripping me off and a little less of it is Pink Houses and why I Ain't Even Done With The Night. Well, a bunch less of it. No matter how much it may or may not be my favorite fucking color, if your house is pink I will shit on your sidewalk. And I was done with The Night sometime in 2004.
I'm not sure exactly when.
I think I wrote down the date.

I still sing a lot.

I owe my mom.
There are so many lessons in there that I may have missed, hidden between the circus lion tamer and the 19th century skeleton buried in a wedding dress in the backyard.