It was pretty cold out the night my little brother kidney punched that old dude. 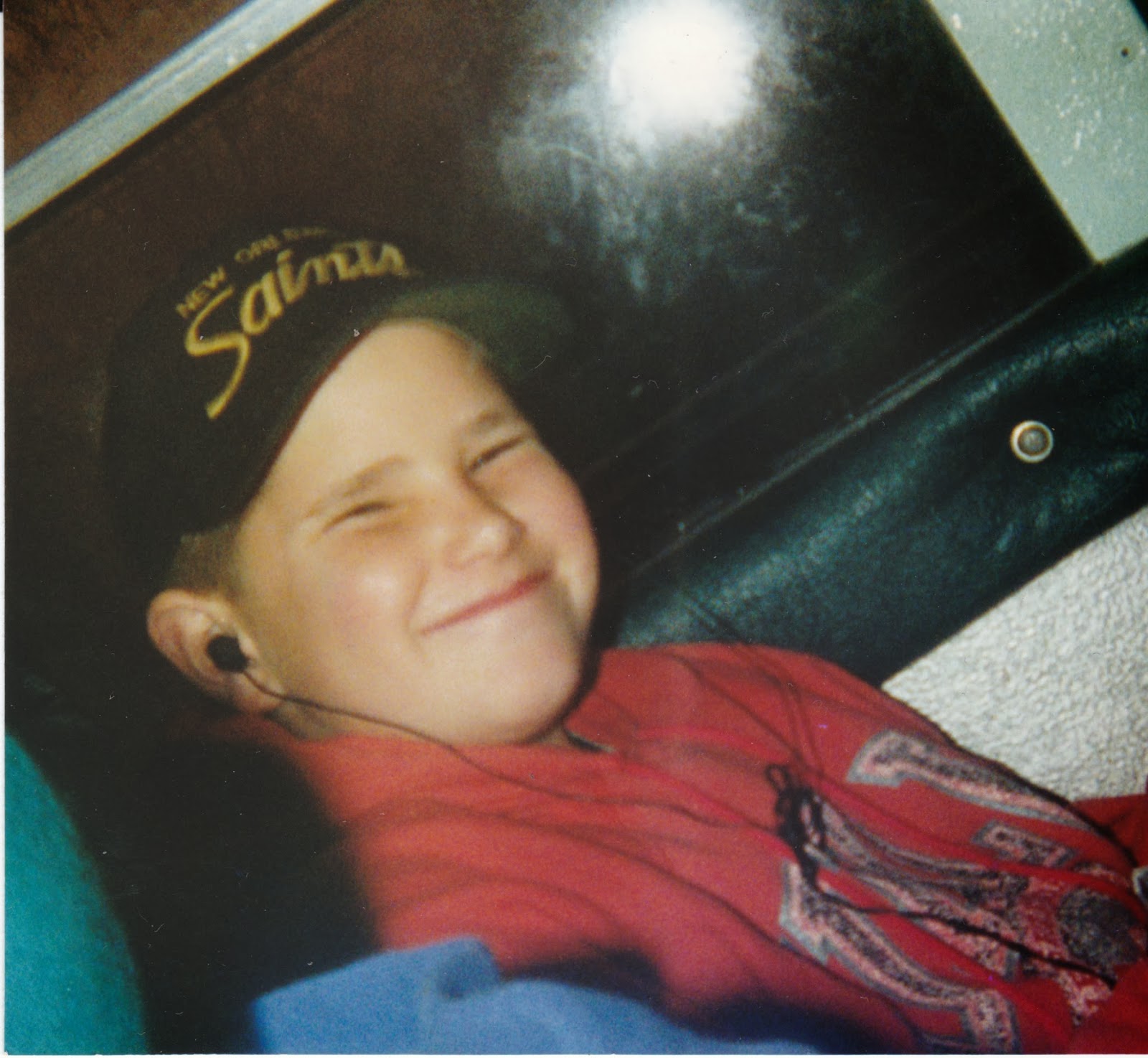 I remember seeing ice crystals beginning to form on the sides of the tiny little puddle struggling to survive under the constant splash-attack of one truck tire after another. With wheels twice the size of my cute little girl truck and an engine with enough rumble to trip your city car's alarm, along they would come. Chevys, Fords, the occasional Toyota; they all slugged down the narrow roadway in front of the bar. The path was pock-marked with scores of water-logged potholes on each side, but those trucks would not swerve, oh no. Those behemoths would claim the road, driving each wheel into the offending obstructions, often slowing down for maximum domination of broken asphalt.
Pothole right side.


Pothole left side.
Pothole right side.

The trucks would bounce side to side on their suspensions as the tires jumped in and out of holes that had laid to rest many a smaller wheel. Not the trucks though. Back and forth they would rock, giving the sporadic procession of vehicular giants a lumbering gait. Trampling through the puddles with a grumble, like the mammoths they can be.

On the cold nights the trucks were less frequent. Their owners more apt to let the beastly machines rest while they themselves warmed a barstool instead. On the cold nights the puddles would freeze over, glaring coldly at the parked trucks. Ice would begin at the edges and work inward, the pothole's makeshift resurfacing a defiant taunt to the silent engines.

There was definately ice on the puddle that night, so it was cold. Probably puts it somewhere in the months right before he died. December, maybe. January more likely.

2005.
(Is that a real year?)
The barstools were full, at any rate, which wasn't typical in December because of hunting season and it couldn't have been February, because Jake was dead by then. And we've determined it was cold. So it must have been January.

I was bartending at the time and watching the migrating trucks was a pastime I enjoyed. I studied their patterns; where they would rest, what time it was typical to see them at the local watering holes, how loudly they informed others of their approach. Each one was unique; some were fast and quickly darted back and forth. Others were powerhouses, approaching slowly with a growl. As a herd they were fascinating. (I was nearly tempted to name names. Someone do me a favor and tell Fatnutz and Noodle that they really dodged a comedic bullet here please.)
I loved watching the trucks come and go. They would often stop for a drink, if you didn't spook them, and I learned how to read the signs that the local mammoths had been around. Which is how I recognized the ice forming in the puddle as a sign that the roadways were quiet that January night.

The old guy deserved it.

My little brother hung out at the bar most nights when I was working and every night that I wasn't. He came to know nearly every other drunk in the small town and could recognize their limits just as well as most bartenders. And he didn't like Gropey Mike.
Well hell, nobody really liked Gropey Mike. He was one of those guys that went from "had one beer" to "whiskey stupid" without pause. Zero to Needs an AssWhoopin' in under a minute.
And he was really gropey.
Gropey Mike would get cut off from every other bar in town (all 3) before hailing a ride on a migrating truck to the watering hole where I worked. No matter who was behind the black and tan bar when Gropey Mike lingered in, he would never get served. (We were under specific orders, you see. And Mr. Shady's word is law.)
I was not even the barmaid on the particular night in which our pal got bean-punted. Had it been me, I would have quickly enforced the Stay 5 Feet From Gropey Mike rule. Because just as Gropey Mike was known to do, when he was refused a drink he tried to grab a tit instead.

Like a tit is going to get him drunk?

Needless to say, the barmaid was not very pleased and became quite indignant. At which point my little brother drug Gropey Mike from the bar and tossed him into the street. The visibly shaken, and recently groped, barmaid poured herself a double shot before calling me at home, and I quickly walked over.
From my house out back.
I'm saying that I lived behind the bar.
I arrived in time to see my little brother blocking Gropey Mike's access back into the bar. Mike was so drunk he could hardly tell the difference between my little brother, as he stood in front of the door with crossed arms, and the wall; Gropey Mike alternately bounced off of each with little comprehension.
I sighed and called Gropey Mike's son, Little Mike, and began to persuade Mike to sit on a quiet curb until his ride arrived. In a moment of weary miscalculation, I found myself in the grope zone of very drunk Gropey Mike.
I wasn't too concerned, as I've spent way too much time in the company of drunken hillbillies to not know how to execute a perfect motherfucking duck-and-spin. But the act enraged my little brother enough for him to issue one very swift jab to Gropey Mike's midsection.

I'm not an advocate of kidney punching the elderly.

My little brother retreated before Gropey Mike even reached the ground with his one gropey hand still reaching for any available tit.

Rather than watch my little brother walk away, I stared at the slightly frozen puddle just to the right of where I stood. I heard the rumble in the distance that told me the trucks would soon be coming. They would lumber to life and head this way; blissfully unaware of the ice struggling to form in the puddle. I saw the headlights of a Chevy gleam across the tiny roadway, damning the fragile crystals at the edge of the pothole to imminent damage.

I stood there and lamented the impending loss for a second before I finally looked my little brother in the eye.

Eyes so blue.
Like looking at myself.
"Thanks Jake."

Hey there.
Let me ask you something.

Did you think THIS is where you would end up being?

Half past the prime of your third decade, slinging back double shots of cheap Kentucky bourbon at 8 am while trying to make the tiny words on the screen tell a story. Spent your entire Friday night in smelly pajamas since the cat isn't able to articulate "your ass stinks" into more than a few feeble meows. Slept curled up on the floor of the hallway; the day's dirty hoodie for a blanket and a rolled-up towel upon which to lay your head.
Mesmerized by the way empty beer bottles were illuminated under the Bubble Lights that line the length of the cramped corridor, you fell into a restless slumber only to awaken mere hours later. Blinking away the glow of vintage baubles to see the cat shaking his head in disapproval, images of the night's foolish dreams still swimming around the sides of your head. The bubbles of your childhood Christmas decorations rising in mocking rhythm, each tiny air pocket bursting in a furious attempt to pop an "I knew this would happen if I hung around" into the quiet air.

Even putting the failed relationships aside (waaaaaay aside, please) I know I'm not the greatest success story in the world.
Or at all.
I mean, sure, I managed to squeeze out a pretty decent kiddo and I scrape by on barely making it. I've sold a few written things here and there, enough to fund my beautiful girl's extra-curricular activities. (Who knew that Jazz Band, Marching Band, Color Guard, Indoor Guard, Band Camp, and Orchestra could cost so damn much? I think we may be nearing the point where my teenage years of drug abuse and felony charges were a damn bit cheaper. Fuck.) Eh, She's worth every penny I s'pose.

I guess I've learned a few things along the way. Even your sisters can be whores, for example. Another one would be: don't drink Absinthe on an empty stomach.
Or, Never trust management.
Avoid growing up for as long as possible.
Laugh with your children.
Don't stare at bubble lights.
Be Creepier.
Feed the cat before passing out in the hallway.

But I've never grasped the reason behind long-term positive goals, and now I'm not sure how to start setting them. Do I begin with the obvious?
Don't Die Right Away.
This may seem like the "gimmie" of a long-term goal for most people. But with the killer cooter and the dead brother and the self-destruction, not dying myself has really been something of a tricky task. Each and every time I wake anew I take a second to smile that my eyes opened again.
Sure, sure. Sometimes my eyes are crusted with lousy decisions and I reek of whiskey and regret, but  damned if I'm not awake.
I'd like to keep doing it. Living. Eh, for a while I s'pose.

Ok, that seemed easy.
Let's set another long-term positive goal.
Be Sad Less.
Not today or anything. Just overall.
Doesn't really look good for February though, what with the brother's deathday being on the 10th and all. I will try not to be as disheartened as the day has made me in the past, but you can be sure as shittin' that it'll be a shitfaced occasion. There's no better way to celebrate a deathday. (That bother ya'll? The use of "deathday" like it's a real thing? It bothers my kiddo. Maybe this year I'll forgo the balloons in favor of something more serious. What shape piñata says "my brother kicked the bucket today"? A donkey?) Eh, he's worth the bad day I s'pose.

All this positivity.
I feel absolutely confident that I'm not screwing up this long-term goal-setting thing at all.

Alright, I can think of another.
Do Something.
Not sure what. Rather not get too specific. This goal may change.

Uck. You know what else?
Don't Do Something.
You know what. No need to get specific. This goal should never change.

Well, some of the optimism sure seems to have suddenly left the list making process, but since we're down here I'm adding
Don't Fuck Up (as much)
and editing the name to Long-Term Reasonably Attainable Goals, If I Want To Try.
That seems more like me anyway.

The positivity was making my head hurt.

Maybe tonight I will sleep in a bed. I could even move the bubble lights into my room.
I'll make it Goal Number One.