A country girl's heart is filled with apple pie.
Made with sugar and spice and everything nice.


A hillbilly girl's heart holds a lot of booze.

With the practice that I've had, one would think I'd be more apt at completing the stages of grieving. Unfortunately, I've never been sober enough to remember how the process ends (uhhh... usually with me face-down in the back of a pickup truck sob-singing random verses of Red Sovine's Teddy Bear while lobbing empties at birds).
I can do this.
I know I can.
I just need to get over myself before I fall out the bottom.
Jump on the wagon, and then push everyone else off so I have more room to haul my booze.

Let me kick my feet up and tell ya'll a story.

The left leg was lime green. The other was stark white. The tread of a bike tire brought them together as it ran down one side of the pants and crossed the ass to the other. The tiny bicycles spattered throughout just made the spandex all the more rad.
YOU MAY NOT QUESTION THE RADNESS OF THOSE PANTS.
I was the most rad youth the Appalachian early 80's had ever seen. The town could hardly handle all the rad that my pants David Lee Roth-kicked into the surroundings. I still remember the stir I caused at the Five-and-Dime when I stole a pack of gum wearing lime green spandex.
I was so rad they called the cops.
The pants alone were enough reason for Mayberry P.D. to throw me right into the back of that police cruiser and haul me down Main Street.
Felony Rad; 1st Degree.
Ok.
Maybe not so.
More like Second Degree Stupidity; Sibling Class.
(You were right, James. They did want to hear about you.)

They delivered us to Elwood (Husband III).
Mom was around later, after "The Man" left. Woody dumbed down the charges. Practically made it seem like the gum stole me. Jimmy though? Well, his was a cry for help; call his dad. "Dispatch to Coyote. The boy's a crook." The brother outlived his charges, but I caved. I caved like a dirty stool pigeon. (I know this because the brother made me watch the godamn Disney Zoo VHS that features the "stool pigeon" for weeks afterward. Bread and Butter.)
I falsely confessed to the theft of that gum.
I was ready for my yipes-stripes-fruit-striped-prison-issue-duds.
Elwood wouldn't let me be sentenced.
"Rolo!" he hollered, certain he could distract with the facts.

They never knew who to believe, the authorities, him or me. A gum or a candy, the evidentiary chain seemed so insubstantial. But when it came to calorie-count, apparently it mattered. And as Mayberry P.D. rounded the alley away from the grape vines it made me wonder; if I had copped to the crime of the multi-pack, would they had overlooked the stolen chocolates? Disregarded the covered-caramel like the stolen confectionary was merely a by-product of a hapless youth and it's wayward direction?
Would the gooey truth ever be exposed?
Well, here it is.

i never stole the gum, i confess.
it was a chocolate-covered caramel.

"ROLO!" I holler, knowing this is the time for my crime.

Elwood was a good man.

I never let my brain do the thinking. That's how things go wrong. Nope, best to let the decision making up to the real experts; boobs and booze.

Those girls know how to have a good time.

Hemingway Is My Boo

Floated far above,
thought I knew about love.
Grown about time,
Figure how this isn't mine.

Stretched throughout.
How do I turn that off?
These emotions spout
Yet here I sit, aloft.

I feel my smile grow.
You have no clue.
Like you wouldn't know,
I Love you.

Here it is again.
Insecurity.
Nothing that I said
will make me pretty.

it feels so nice,
wrapped in your embrace
that for a moment
I forgot who to hate.

She knows her wheelhouse.

I've driven a stick shift with a dick in my hand. What country girl hasn't?

My Mama isn't a creepy perv.
It's weird.
All THIS isn't from her.
My Mama never did ass-to-mouth.
(Unless you count the fourth husband, and really, who does?)

I only count the third husband anymore.

He was a pretty freaking good guy, Elwood Sheldon. He taught me that it is more than okay to be more than weird. He knew I had spirit. He hid me from the darkness. He brought me back from where I shouldn't have been. He laughed at my shitty jokes.
Mama was married a few more times than most. A couple of them stuck a while; Daddy (Husband II) was around for the better part of two decades but spent a quarter million truck-driving miles a year on the road. The first dodged responsibility like it was the 'Nam draft and the fourth bailed before the frost thawed to bury my brother.
Nope, it was Mama's husband the third that made the impact on me.

Confidence was beaten out of me at a young age by a bitter father and a mean older brother. Not to say I didn't instigate.. I s'pose you can imagine how my smart mouth never knew when to shut the fuck up. But with Woody (Husband III)  I got laughter instead of teeth-rattling blows at my smartass retorts. His joyous whole-body chuckles at my wit-filled replies made me seek more and more smart responses. I would create troubled situations at a very young age just to make him laugh with my explanations of events occurred.
"Sure, sure. I stole my brother's bike. I was TIRED of walking home."
LolLOLolLOL.

Nobody ever felt the energy of JOLEEN DOREEN quite like Woody (Husband III).

I cried more for his passing than I did for my own father.
I s'pose it's because Daddy was a cold-hearted man; he outlasted more strokes than every member of the Rolling Stones combined and yet refused to listen to a song that wasn't performed by a Conway or a Cash. I thought he died a half-a-dozen times before he really did. Daddy was a hard man. Not even Death was going to get the upper hand on him.
Woody (Husband III) was different. He was everything Daddy was not. He was jovial when things were extraordinary. He giggled at the wonderful. He argued with EVERYTHING. He was infuriating and so fucking stubborn.

He fostered an atmosphere of weird that helped create ME.

He was a good hearted man killed by a bad heart.

I will miss him more than all these words can tell you.

I haven't been very keen on the holiday season these last few years. The brother dying really fucked up my festive nature. It's not easy to find a complete set of squirrel-skin stockings and I can't for nothing figure out where he put our old ones.
And making new ones?
In this economy?
Well, I'd just as soon not celebrate at all.

Working in the shipping industry has allowed me to fill the loneliest holiday hours with hectic hilarity. Double overtime and triple shifts. Can't remember the last shower that didn't involve a nap. Shots of 8am whiskey and bologna breakfast sandwiches. For one month out of the year, everyone smells as bad as my dead brother. 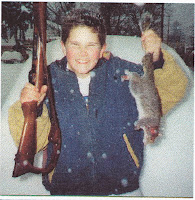 It reminds me of home.

I miss my brother. I don't talk about him often anymore. I usta did, back when. But then he got all quiet while I lived without him for a while.
It made me sick.
Everyone shouldered their own grief while mine galloped along on its own. And when it returned it was a relic; a who's who of who isn't who anymore. And the others, well, the others don't much like me as of late so it shouldn't make a lick of difference that I still like the dead one better anyway.
(Plus, Mama means a lot to me, and even Jake, in his grand crown of fuckitude, could see that ya'll judge her like you're Jesus recoming. We've ALL fucked up, ya douchebags, quit acting like your Mama did you worse than YOU did you.)

I can pallet-stack my cynicism. I can unload a trailer full of bitterness. I can pick-off sarcasm. I've labeled all of my misgivings with an Early A.M. sticker and sent them out before the rest of the world arose. I have absolutely no problem pointing at my fuck-ups and declaring them to have missed service.

I am a fucking misload.

This may come as a surprise, but I don't often fit in. I know, I know. Seems weird to me too. But it's true, I've always been a little to the distant side of normal.
I s'pose that's alright with me. I've never noticed, having been way too busy dancing to the music in my head. And then one day I looked up mid-twirl and they weren't laughing at me anymore. Well, they were still laughing at me. But I was laughing too.
And skipping.
And dancing.
And singing.
And working.
Work and work and work until elation. Work until satisfaction sets in. Work until the sweat smells as bad as the memories. I work until the music stops and my head is quiet.
Sometimes I find myself on the clock for 24 hours in a row and it doesn't even bother me a any more than a tick on a dead buck.
Probably bothers payroll though.

I see the normal ones, shaking their heads as if they might swish away my crazy. The whispers swirling around in a convoluted web of incomprehension. The "Whys" meet the "Whatevers." The "Weirdos" tend to overwhelm the "AttaGirls." I know people don't understand why I work, and work, and work. But some do.

I tend to scare people away easily. I know, I know. Seems weird to me too. But it's true, people can be a little put off by my intensity. (BECAUSE THEY ARE PUSSIES.) I s'pose that's alright with me too. I've been able to keep a ring around myself to keep distance from the people that are just stopping by to witness the freakshow.
I get a lot of day-trippers. Seasonal workers, if you will.
They come because the job looks quick and easy and then they crap out when they realize the work is never really done.