'Tis that time of year.

When Joleen Doreen gets all giddy.

The air is streaked with wisps of change. The nights get cooler and all my favorite bands release new albums. Books become a thing again; no longer blinded by the summer sun, the eyes can read anew. School is back in session; the need for education only slightly overshadowed by the joy of someone else listening to my teenager's mood swings.
The leaves sway in the breeze, falling ever so slowly to the ground. One by one they fall, each marking a moment passed and thought of not again. The whack of an acorn on the neighbor's car roof; the chatter of the squirrel who I paid to throw nuts at my neighbor's vehicle. Every once in awhile the thud of a crab apple hitting the yellowing grass reminds me of the best of the season yet to come.
And come, they do.
By the bushel.

Apples.
(refusing a Good Will Hunting reference with all my Affleck might.)

Yes, apples.
Shiny and bright, picked from the trees. Dull and ripe, fell with the leaves. Baskets and baskets of mighty fruit begging to be hauled. Filling my kitchen with the tart smell of the Autumn air, apples cover every inch of my counter. Peeled and cored to naked imperfection; striped bare and sliced to pieces.
In the pot they go.
Boiled with rage and simmered back down.
Bubbles until it stops.
Fermentation.
Condensation.
SCIENCE.

Fragrance so sweet, like the blossom of a million possibilities. With notes of hope and tones of home. Just a hint of drunken antics mixed with a 'lil Hell Yeah. And a whole heap-load of That's Gonna Hurt Tomorrow.

Ahh.
The beauty of Autumn.
I was born in October, you see. As was my daughter, the day after me (Albeit, twenty-some VERY odd years later). The entire month is technically considered "OUR Birthday" from October 1st until the day after, when it's just "the week of Halloween."
Halloween! Another favorite! I'm going to be Harry Potter this year. Tenth year running. Think I'll mix shit up a little and be Harry Potter from the third movie instead of the any of the books. Nobody will see that coming! That's as different as oranges and apples!
Holy shit, Apples!

I'll be jarring it up soon. Fixin' to get about a dozen quarts from this batch. (All ya gotta do is ask, if you know how.) It should keep pretty well over the winter. 190 proof makes a good preservative. I'll need to ration myself. Once October's over the best apples won't be back again until next year. According to my calculations, at the rate I've been drinking, I have enough to last until next week.

Apples. October. Happy Hillbilly.
Too Small, Too Green, Too Soon, and Just Right are this girl's seasons.
And right now is Just Right. 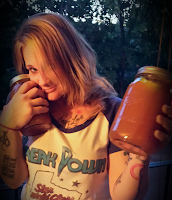