Death is a Whore

Dying. Sucks.
AmIright?
I don't care much for Death, so selfish in her agenda. All take and no give, that Angel of Darkness. I met her once, on a dark road in the middle of life. Thankfully I was too drunk to walk all the way to the gates of hell, and Death doesn't seem much for carrying people. Some places you got to get to on your own.
Sucks.

Hell, I reckon Death has the intake capability of a twin-turbo. That's a lot of high-pressure suck. (dear gearheads, I KNOW.) Still, just as soon as a thrown rod will ruin your day, Death will knock without warning. (I don't know why I wrote to the gearheads. Everyone knows they can't read*. Please do your part to improve the life of a gearhead by reading them my hilarious puns. It'll get your motor running.)
*(editor's note: my ex-husband informs me that I am wrong. More on how much I don't fucking care as the story develops.)

It's inevitable, you know. Road head. Happens to everyone. No, I mean death, of course. Doesn't make it any easier to deal with. There's an unbelievable sadness that follows Death around. If she could be any one thing, it would be a Death Cab for Cutie album. On cassette. Stuck in the radio of a teal T-top Camaro. But a mid-80's Camaro. And not even the V8.
Suuuuuuucks.

Grief is contagious. When you die it spreads to everyone you know.

Death can be sneaky. Sometimes that bitch will snatch someone from your life so fast; the Ninja of the Afterlife. Didn't know you needed to say goodbye so you didn't. Suddenly they're gone and you still don't understand where they went. Death watches you falter from the shadows, having stealthily extracted a tiny pillar from your life.
I must have turned in a hundred circles today, looking at a spot that's empty. It sure is going to be hard to adjust to not having Pockets. 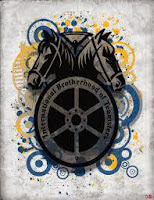